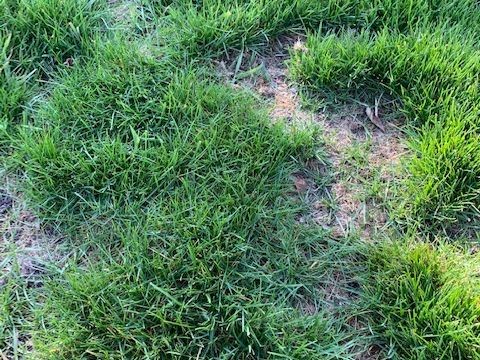 Diseases (fungus) can attack grass (and other plants) during the growing season. Diseases can both degrade the appearance of the grass and sometimes kill the grass. Because of this, most clients do not want to see disease on their lawn.

Diseases can infect the lawn anytime during the year. However, the type of disease infecting varies based on the weather. So, it is important to properly identify the disease to have success managing the disease.

Disease control focuses on preventative measures. Once a disease infects a plant, a fungicide can only stop further disease infection and damage. Existing damage will either have to recover naturally or be repaired.

bioLawn’s Disease Control Program has 5 applications. These applications are applied monthly May – September. For the best results a client would receive all 5 applications, but most clients get only the applications that target the disease problem they have in their lawn.

The result of a Disease Control Program applications is a reduction in the amount of disease in the lawn. Disease control only provides a protection window, usually up to 30 days. Once the protection window is gone, there is no longer any protection to prevent the disease from infecting. Additionally, even when disease control program is in place, disease can occur if the pressure, weather conditions are extremely favorable for disease development.

Most Common Lawn Diseases in Minnesota and Wisconsin

Snow Mold – Snow mold disease infects grass during the late fall, through the winter and into the early spring. Snow mold creates patches of brown grass, usually matted over and crusty as it dries out. Because snow mold infects under the snow layer, a fungicide needs to be applied before snowfall in the fall. Snow mold treatment is a different treatment not included in the normal Disease Control Program. bioLawn offers a separate Snow Mold Preventative application for this disease.

Summer Patch – Summer Patch infects the lawn in May and June. Summer Patch creates circular rings of dead grass with green grass in the middle. The visual evidence of an infection shows up in July and August after the disease has already infected. Typically, a lawn is diagnosed with Summer Patch in late summer and treatments begin the next year to prevent future infections.

Red Thread – Red Thread can infect the lawn anytime there is excess moisture, usually in cooler weather. Red thread creates pink strings/strands in the lawn, that then bleaches the leaf blade. Red Thread causes visual disturbance but doesn’t kill the grass. Because of this, red thread is often not treated. Because moisture can occur at any time treating red thread requires all 5 applications of the Disease Control Program.

Dollar Spot – Dollar spot infects the grass when nighttime temperatures are above 65 degrees and there is plenty of moisture. Dollar spot produces small (tennis ball sized) brown spots in the lawn. This disease does not kill the grass. This disease is often not treated, but when a client wants to control it applications are done June – September.

Ascophyta – Ascophyta causes a rapid bleaching of the leaf tissue. It does not form specific shapes and it covers a sizable portion of the lawn. It most often infects during hot weather but has shown up in cooler weather. Ascophyta is a secondary infector and usually infection occurs after mowing that stresses the grass. The Disease Control Program is marginally effective against this disease but can help.

Fairy Ring – Fairy Ring is a soil borne disease in the soil. Fairy ring does not infect the grass. Rather it decomposes organic matter in the soil and releases nitrogen. This nitrogen causes the grass to form a dark green circle. When excess moisture is present, the fungi will produce mushrooms in the lawn. These mushrooms do not harm the grass but do create a visual disruption in the soil. The disease control program can help, but since there are many types of Fairy Ring fungi, applications are needed throughout the year. To get the best results, applications to control Fairy Ring should be watered into the soil.

Rust – Rust typically infects in the summer and fall under high humidity conditions. Rust produces an orange look to the lawn that will get all over shoes. Applications of the Disease Control Program in July – September can prevent Rust.

"My summer service happened this week and the tech was extremely helpful. Arlo was knowledgeable and helpful."

"We believe the long-term relationship with Biolawn has led to a better lawn overall (our neighbors think so too). Thank you for your study, thoughtful lawncare program, and terrific service. "

"Thanks so much for your service this year. I think we have the nicest lawn on the block!"

"As a new customer, I am remarkably impressed with your responsiveness and personal attention. Thank you!!"

"We are very happy with the way the lawn is looking!!"

"Thank you for the email – this years program looks great! Looking forward to another year of great service and excellent results!"

"You have been such an amazing crew. I love the frequent communication and the happy technicians. You have all been fantastic!"

"Our lawn looks better with bioLawn than with several other companies we have hired in the past."

"BioLawn best lawn service EVER!!! Even in a drought my lawn looks great. I followed Oakdale watering rules and BioLawn did their part. Now I have the best lawn in the neighborhood. Their lawn tech nailed it with identifying the few weed problems I did have and applied the right weed killer. You can not water PART of your yard once or twice a week in a drought and expect a good lawn. BioLawn maybe the BEST lawn service on the face of the Earth !!!"